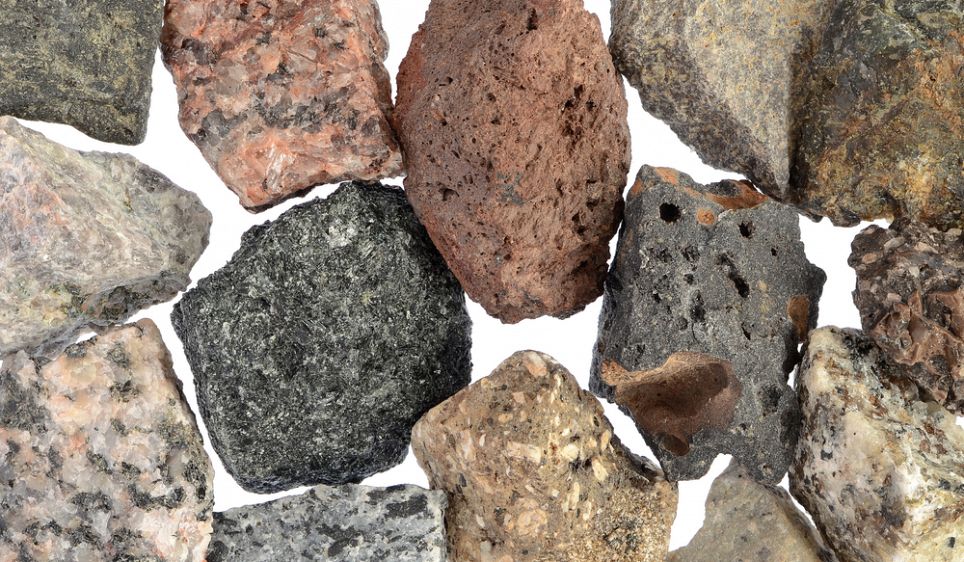 Geochemistry of Igneous Rocks: Igneous rock,  crystalline or glassy rocks formed by the cooling and solidification of molten earth material. Igneous rocks constitute one of the three principal classes of rocks, the others being metamorphic and sedimentary.

Igneous rocks are formed from the solidification of magma, which is a hot (600 to 1,300 °C, or 1,100 to 2,400 °F) molten or partially molten rock material. Earth is composed predominantly of a large mass of igneous rock with a very thin veneer of weathered material—namely, sedimentary rock. Whereas sedimentary rocks are produced by processes operating mainly at Earth’s surface by the disintegration of mostly older igneous rocks, igneous—and metamorphic—rocks are formed by internal processes that cannot be directly observed and that necessitate the use of physical-chemical arguments to deduce their origins. Because of the high temperatures within Earth, the principles of chemical equilibrium are applicable to the study of igneous and metamorphic rocks, with the latter being restricted to those rocks formed without the direct involvement of magma.

Magma is thought to be generated within the plastic asthenosphere (the layer of partially molten rock underlying Earth’s crust) at a depth below about 60 kilometres (40 miles). Because magma is less dense than the surrounding solid rocks, it rises toward the surface. It may settle within the crust or erupt at the surface from a volcano as a lava flow. Rocks formed from the cooling and solidification of magma deep within the crust are distinct from those erupted at the surface mainly owing to the differences in physical and chemical conditions prevalent in the two environments. Within Earth’s deep crust the temperatures and pressures are much higher than at its surface; consequently, the hot magma cools slowly and crystallizes completely, leaving no trace of the liquid magma. The slow cooling promotes the growth of minerals large enough to be identified visually without the aid of a microscope (called phaneritic, from the Greek phaneros, meaning “visible”). On the other hand, magma erupted at the surface is chilled so quickly that the individual minerals have little or no chance to grow. As a result, the rock is either composed of minerals that can be seen only with the aid of a microscope (called aphanitic, from the Greek aphanēs, meaning “invisible”) or contains no minerals at all (in the latter case, the rock is composed of glass, which is a highly viscous liquid). This results in two groups: (1) plutonic intrusive igneous rocks that solidified deep within the crust and (2) volcanic, or extrusive, igneous rocks formed at Earth’s surface. Some intrusive rocks, known as subvolcanic, were not formed at great depth but were instead injected near the surface where lower temperatures result in a more rapid cooling process; these tend to be aphanitic and are referred to as hypabyssal intrusive rocks.

The deep-seated plutonic rocks can be exposed at the surface for study only after a long period of denudation or by some tectonic forces that push the crust upward or by a combination of the two conditions. (Denudation is the wearing away of the terrestrial surface by processes including weathering and erosion.) Generally, the intrusive rocks have cross-cutting contacts with the country rocks that they have invaded, and in many cases the country rocks show evidence of having been baked and thermally metamorphosed at these contacts. The exposed intrusive rocks are found in a variety of sizes, from small veinlike injections to massive dome-shaped batholiths, which extend for more than 100 square kilometres (40 square miles) and make up the cores of the great mountain ranges.

Extrusive rocks occur in two forms: (1) as lava flows that flood the land surface much like a river and (2) as fragmented pieces of magma of various sizes (pyroclastic materials), which often are blown through the atmosphere and blanket Earth’s surface upon settling. The coarser pyroclastic materials accumulate around the erupting volcano, but the finest pyroclasts can be found as thin layers located hundreds of kilometres from the opening. Most lava flows do not travel far from the volcano, but some low-viscosity flows that erupted from long fissures have accumulated in thick (hundreds of metres) sequences, forming the great plateaus of the world (e.g., the Columbia River plateau of Washington and Oregon and the Deccan plateau in India). Both intrusive and extrusive magmas have played a vital role in the spreading of the ocean basin, in the formation of the oceanic crust, and in the formation of the continental margins. Igneous processes have been active since the onset of the formation of Earth some 4.6 billion years ago. Their emanations have provided the water for the oceans, the gases for the primordial oxygen-free atmosphere, and many valuable mineral deposits.

95 percent of crustal rocks are of igneous origin (formed from molten silicate masses, or magmas). Sedimentary rocks occur as a thin veneer on an igneous or metamorphic basement, except where locally thickened in mountain belts. The primordial rocks of the crust must have been essentially igneous, and the first sedimentary rocks were derived from them by processes of weathering and erosion. Metamorphic rocks are formed from both sedimentary and igneous rocks by transformations due to heat and Pressure at depth in the crust; unless very intense, these transformations do not totally obliterate the primary igneous or sedimentary features.

The great majority of the igneous rocks are composed of silicate minerals (meaning that the basic building blocks for the magmas that formed them are made of silicon [Si] and oxygen [O]), but minor occurrences of carbonate-rich igneous rocks are found as well. Indeed, in 1960 a sodium carbonate (Na2CO3) lava with only 0.05 weight percent silica (SiO2) was erupted from Ol Doinyo Lengai, a volcano in northern Tanzania, Africa. Because of the limited occurrence of such carbonate-rich igneous rocks, however, the following discussion will consider the chemistry of silicate rocks only. The major oxides of the rocks generally correlate well with their silica content: those rocks with low silica content are enriched in magnesium oxide (MgO) and iron oxides (FeO, Fe2O3, and Fe3O4) and are depleted in soda (Na2O) and potash (K2O); those with a large amount of silica are depleted in magnesium oxide and iron oxides but are enriched in soda and potash. Both calcium oxide (CaO) and alumina (Al2O3) are depleted in the rocks that have a silica content of less than about 45 weight percent, but, above 45 percent, calcium oxide can be as high as 10 percent; this amount decreases gradually as the silica increases. Alumina in rocks that contain more than 45 percent silica is generally above approximately 14 weight percent, with the greatest abundance occurring at an intermediate silica content of about 56 weight percent. Because of the importance of silica content, it has become common practice to use this feature of igneous rocks as a basis for subdividing them into the following groups: silicic or felsic (or acid, an old and discredited but unfortunately entrenched term), rocks having more than 66 percent silica; intermediate, rocks with 55 to 66 percent silica; and subsilicic, rocks containing less than 55 percent silica. The latter may be further divided into two groups: mafic, rocks with 45 to 55 percent silica and ultramafic, those containing less than 45 percent. The subsilicic rocks, enriched as they are in iron (Fe) and magnesium (Mg), are termed femic (from ferrous iron and magnesium), whereas the silicic rocks are referred to as sialic (from silica and aluminum, with which they are enriched) or salic (from silica and aluminum). The terms mafic (from magnesium and ferrous iron) and felsic (feldspar and silica) are used interchangeably with femic and sialic.

The silica content also reflects the mineral composition of the rocks. As the magma cools and begins to crystallize, silica is taken from the magma to be combined with the other cationic oxides to form the silicate minerals. For example, one mole of SiO2 is combined with one mole of MgO to make the magnesium-rich pyroxene, MgSiO3 (enstatite): SiO2 + MgO → MgSiO3. Two moles of SiO2 are needed to be combined with one mole each of CaO and Al2O3 to make the calcium-rich plagioclase, CaAl2Si2O8 (anorthite). However, in a case where magma does not have enough silica relative to the magnesium oxide to produce the pyroxene, the magma will compensate by making a magnesium-olivine (forsterite; Mg2SiO4), along with the pyroxene, since the olivine requires only one-half as much silica for every mole of magnesium oxide. On the other hand, a silicic magma may have excess silica such that some will be left after all the silicate minerals were formed from the combination of the oxides; the remaining “free” silica crystallizes as quartz or its polymorphs. The former case usually occurs in subsilicic rocks that characteristically will have silicate minerals like magnesium-olivine, sodium-nepheline (NaAlSiO4, which requires only one mole of silicon for every mole of sodium [Na]), and leucite (KAlSi2O6, which requires only two moles of silicon to one mole of potassium [K]). These three minerals substitute in part for enstatite, albite (NaAlSi3O8, requiring three moles of silicon for one mole of sodium), and orthoclase feldspar (KAlSi3O8, requiring three moles of silicon for one mole of potassium), respectively. Quartz clearly will not be present in these rocks. Minerals such as magnesium-olivine, nepheline, and leucite are termed undersaturated (with respect to silica), and the subsilicic rocks that contain them are termed undersaturated as well. In the case of rocks that have excess silica, the silicic rocks will have quartz and magnesium-pyroxene, which are considered saturated minerals, and the rocks that contain them are termed supersaturated.

The major mineralogical components of igneous rocks can be divided into two groups: felsic (from feldspar and silica) and mafic (from magnesium and ferrous iron). The felsic minerals include quartz, tridymite, cristobalite, feldspars (plagioclase and alkali feldspar), feldspathoids (nepheline and leucite), muscovite, and corundum. Because felsic minerals lack iron and magnesium, they are generally light in colour and consequently are referred to as such or as leucocratic. The mafic minerals include olivine, pyroxenes, amphiboles, and biotites, all of which are dark in colour. Mafic minerals are said to be melanocratic. These terms can be applied to the rocks, depending on the relative proportion of each type of mineral present. In this regard, the term colour index, which refers to the total percentage of the rock occupied by mafic minerals, is useful. Felsic rocks have a colour index of less than 50, while mafic rocks have a colour index above 50. Those rocks that have a colour index above 90 are referred to as ultramafic. These terms are to be used only for the mineralogical content of igneous rocks because they do not necessarily correlate directly with chemical terms. For example, it is common to find a felsic rock composed almost entirely of the mineral plagioclase, but in chemical terms, such a rock is a subsilicic mafic rock. Another example is an igneous rock consisting solely of pyroxene. Mineralogically it would be termed ultramafic, but chemically it is a mafic igneous rock with a silica content of about 50 percent.

Accessory minerals present in igneous rocks in minor amounts include monazite, allanite, apatite, garnets, ilmenite, magnetite, titanite, spinel, and zircon. Glass may be a major phase in some volcanic rock but, when present, is usually found in minor amounts. Igneous rocks that were exposed to weathering and circulating groundwater have undergone some degree of alteration. Common alteration products are talc or serpentine formed at the expense of olivine, chlorites replacing pyroxene and amphiboles, iron oxides replacing any mafic mineral, clay minerals and epidote formed from the feldspars, and calcite that may be formed at the expense of any calcium-bearing mineral by interaction with a carbon dioxide (CO2)-bearing solution. Glass is commonly altered to clay minerals and zeolite. In some cases, however, glass has undergone a devitrification process (in which it is transformed into a crystalline material) initiated by reaction of the glass with water or by subsequent reheating. Common products of devitrification include quartz and its polymorphs, alkali feldspar, plagioclase, pyroxene, zeolite, clays, and chlorite.